Meïkhâneh’s compositions are fed by imagination, improvisation and traditional music from Europe, Mongolia and Iran. The luminous and captivating voices carry the power of East European singings, the aerial melodies of the great spaces, as well as the depth of the khöömii, Mongolian overtone singing. One can hear traveling cords recalling the steppes of Asia and Andalusia. The chiseled rhythms of percussion draw on the Persian tradition. Meïkhâneh takes us to the heart of a music without borders that caresses
the soul. Its name borrowed from Persian poetry means the «House of Intoxication». We let ourselves be carried…

For their second album La Silencieuse, the trio Meïkhâneh has invited three guests: Bijan Chemirani with the lutes tzouras, saz and percussions, Uuganbaatar Tsend-Ochir (Egschiglen) with Mongolian horse head double- bass ikh khuur and Martin Coudroy with diatonic accordion. Prepared in residence at Le Chantier (Center for the Creation of New Traditional Music and World Music in Correns) with the artistic advice of Bijan Chemirani, Meikhâneh recorded this album at the Studio du Faune with Antoine Pinçon. With the help of Le Chantier, the funders of an independant crowdfunding campaign, and city council of Rennes.

New Album 2017: for a complete press review see at www.meikhaneh.com/en/press

fROOTS (UK)
★★★★★
“Hard to imagine it won’t be one of my handful of favourites of the year.” – Ian Anderson

TÉLÉRAMA SORTIR (FR)
“A high voice often with an angelic appearence […] which is also capable of more baroque intensity, that wanders in a mind-blowing way somewhere between the Steppes of Mongolia […] and the sides of Euphrates.” – Anne Berthod

BLOGFOOLK (IT)
“Wisdom and depth, fed with the soul, lightning, a dark but visionary atmosphere, dissonances, small pains, realizations: “La Silencieuse” is all this at the same time.  each time you listen to it, you catch new details”. – Carla Visca

RYTHMES CROISÉS (FR)
“La Silencieuse [The Silent] might be the name of the soul of the listener after having listened to Meïkhâneh.” – Stéphane Fougère

Ouest-France, 20/10/14
«Meïkhâneh has touched the heart… A vagabond trio to be followed.»

Ethnotempos, 13/10/12
«Newcomer in the sphere of travelling music, Meïkhâneh trio distills a sound mixture that inevitably evokes the great untamed spaces, windy and dry, that put the human being in its true place on the globe … (…) The discographic debut of Meïkhâneh is certainly akin to a journey on the Silk Road, but offers a homemade “alternative itinerary” that deviates from the trails too signposted. (…) So, every soul wanders there will be in a both unknown and familiar ground».

Trad Magazine, Gérard Viel, oct. 2012
«The group makes us travel in an unusual and convivial world of sound, for a stroll beyond the borders, time and space».

Radio Campus Rennes, 23/04/12
«You know which cliché can convey the “world music”. Here, you can easily forget them. A mixture of various traditions offers your ears a really surprising outcome. This trio from Rennes prepared us a form of musical and cultural broth with rare intensity of flavour».

Les Rennais, J.B. Gandon, n°17 2014
Letters and Notes. A disc
Meïkhâneh / La maison de l’ivresse (Self-production – Cas particuliers)
«SILK STREET IN RENNES
At the house of intoxication, flows a volapük cocktail which only Meïkhâneh, the boss, knows the recipe. Here we talk a little about Mongolia, Iran, Portugal and Hungary, and it is true that the caravan is soon to enchant us.
It is not a journey by night train in the dusk, but rather a light ride between Khan and Shah. Actually the first album of Meïkhâneh was illuminated end to end by Iran and Mongolia. Here, the yurts of Ulaanbaatar have a Bulgarian, or in any case, Eastern European taste. In The House of Intoxication, in fact, the scenery does not change as stages, by the six tracks on the album, but inside of the each piece. With Maria Laurent, a singer from Rennes, on the microphone, we are guaranteed to leave with a bonus of a wonderful collection of voice timbres. Accompanied by Johanni Curtet, an emeritus guitarist mastered the art of overtone singing, and Milad Pasta, the Iranian percussionist, this singer playing horse head fiddle and Mongolian lute invites us to travel across the steppes, under the watchful eye of a Lisbon poet. When the caravan serenely moves up through the beautiful falls of fado to the bottom of the Mongolian (throat) gorge, with the wandering minds, we are carried away to the moving sands, thinking that “The melancholy is one of the things most equitably shared on earth”. From “The Thirst Street” of Rennes to the Silk Road of Marco Polo, The House of Intoxication by Meïkhâneh is never dry of emotions and we don’t stop heaping praises». 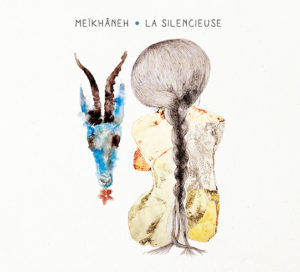